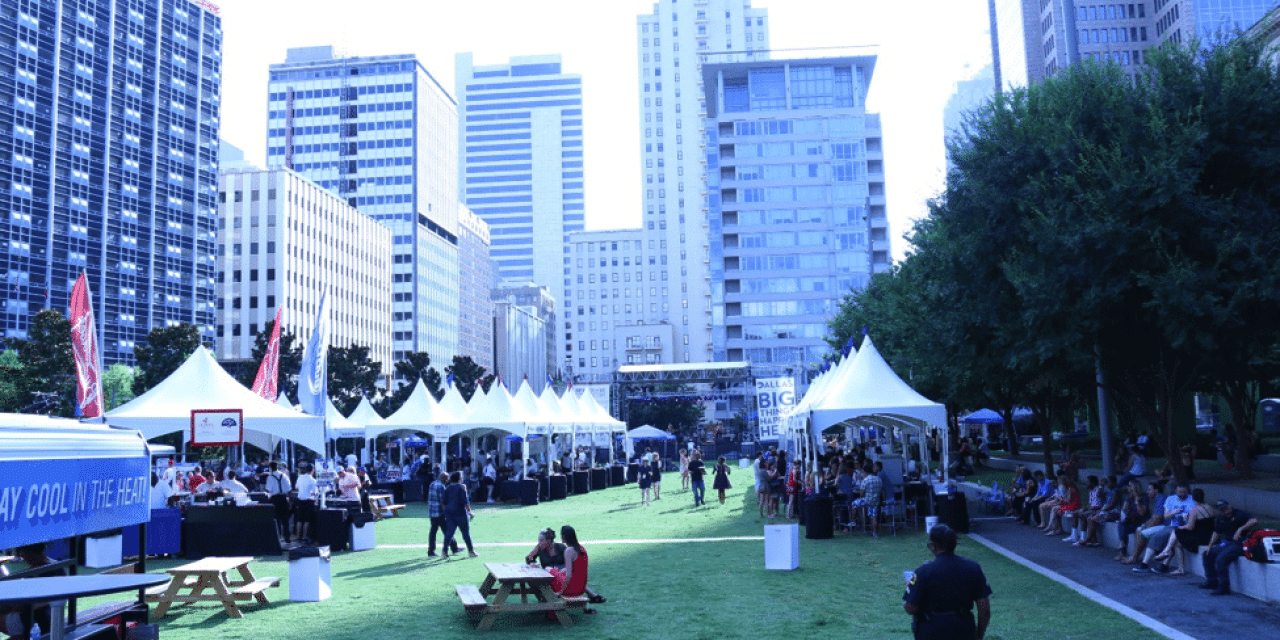 I attended this amazing festival mid-August with all types of food, fun and libations, along with some of the great music to top it off. As Dallas goes, so goes food and drinking. This inaugural event featured some of the best restaurants across Dallas-Fort Worth, ringing in the 2016 DFW Restaurant Week. From Fletcher’s to Season 52, to one of my favorite spots, The Keg. For a single day pass of $15 and $20 a sheet for food coupons, this event keeps the food and fun going for a reasonable price. 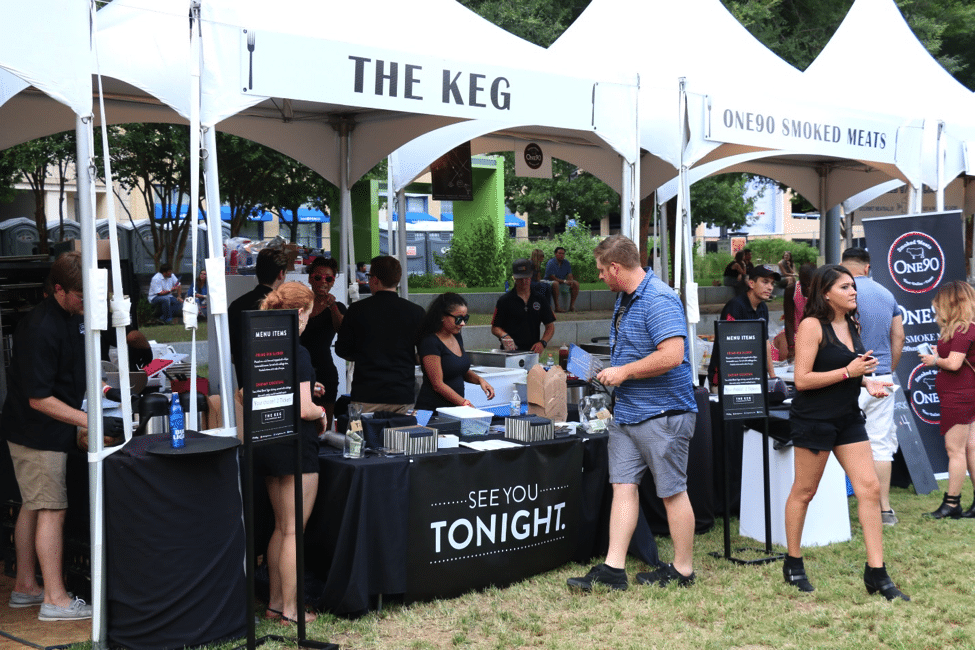 The Keg. Photo by Tre Abraham.

If you have never been to The Keg, it’s worth a walk up. The Keg has locations in Plano, Arlington and Irving. And my friend Jackie, who worked at The Keg booth, hooked up these cocktail shrimp which got my afternoon started right. 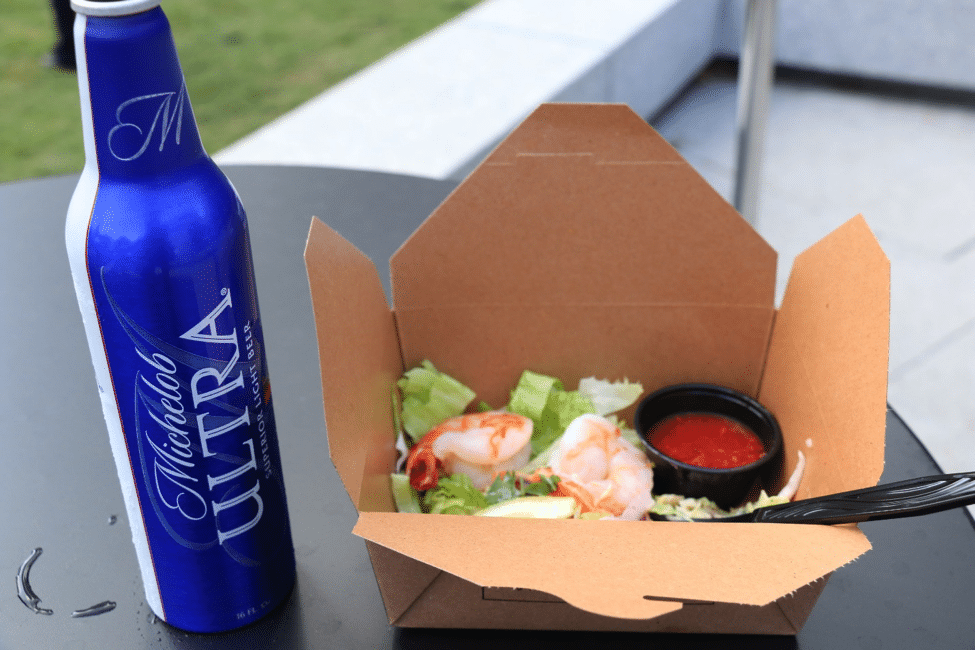 Shrimp & a frosty beverage from The Keg. Photo Tre Abraham.

As I make my way around the park and the sun begins to settle, the crowd pours in. My next stop: the VIP lounge. Let’s see if this lives up to a true VIP section. But before I make it there, a couple of patrons ham it up — this is how we do in DFW… 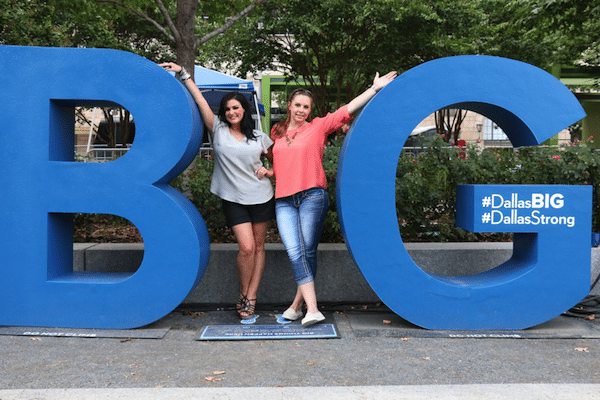 The big BIG makes an appearance. Photo by Tre Abraham.

So as the DJ spins the tunes on the ones and twos, the VIP crowd starts to fall in. And as the Aaron Hendricks Project begins to take the stage, the VIP lounge continues to fill up. Here the beef and tequila are flowing. And as we continue to vibe to the music, a toast of el Mayor Tequila is next level. 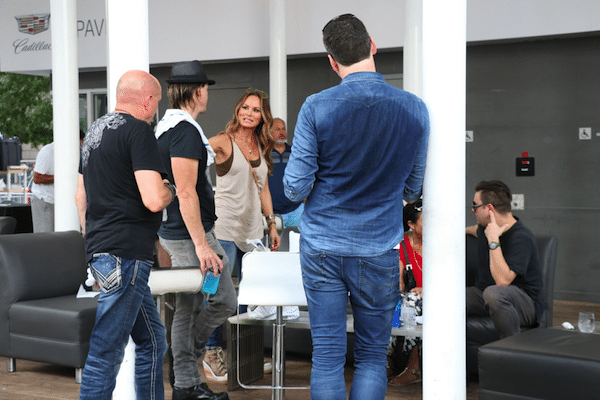 Is that one of the Housewives of Dallas?? Photo by Tre Abraham

Next stop, Fletcher’s for a corn dog and funnel cake. This food and wine festival is getting better by the minute. And as the crowd gets charged for preparation of the band MAGIC, coming to the stage, the sun has gone. Late night, great food, great drinks and music to dance to; this is a great evening.

While waiting, a man sitting on a bench smoking a cigar sees me with my camera, taking pictures and interviewing. He starts asking questions. Sabino is his name and turns out, he co-owns an inner city restaurant tour bus called Bijou Belle. He takes me on a tour of the bus and introduces me to the staff. The setup is nice: 16 seats, kitchen in the back and some of the best beef wellington you will ever taste on a two-hour tour of Dallas. I spend a few moments with Sabino, Koby (co-owner) and the staff for a quick interview. This concept is great and this short experience was even better.

As I hear the announcer make the call for MAGIC TO THE STAGE, I join the crowd headed in that direction. The moonlight sets in and the final part to a great night begins. 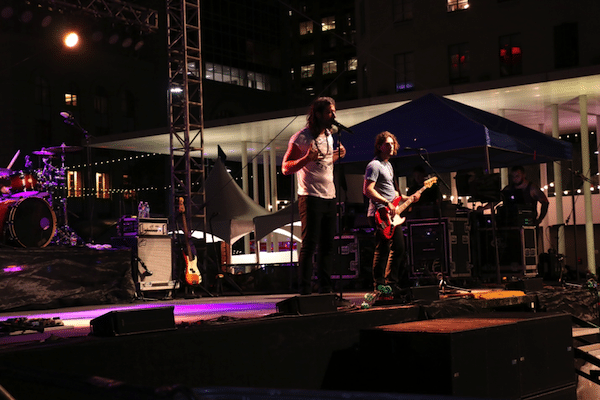 So as the crowd continues to groove the sounds of MAGIC!, I take in how amazing this event truly was for the evening. We all know about DFW Restaurant Week and how good the restaurants are that are a part of this event. But adding a food and wine festival and musical acts like MAGIC to the scene, have me truly anticipating more next year. 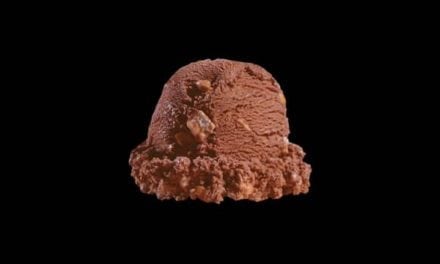 Rocky Road Soothed My Soul After A Hack 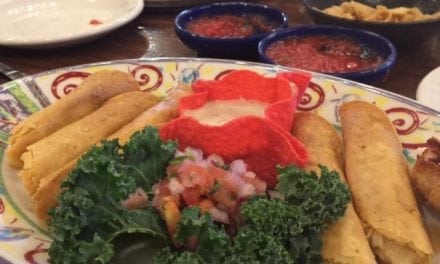 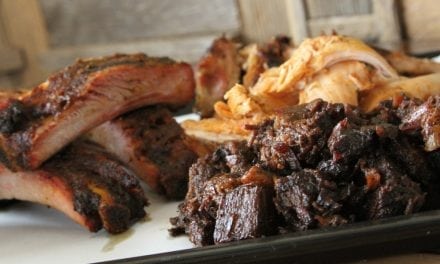 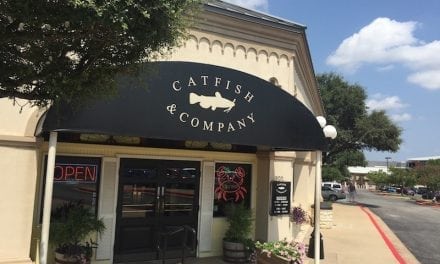 When is the last time that you had some catfish?